How Big is the Meat Industry in Canada? (The 2022 edition) 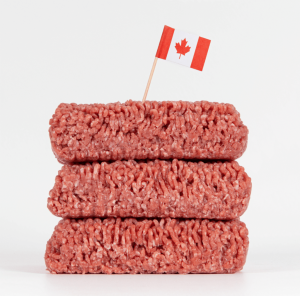 How Big is the Meat Industry in Canada? The Stats & Facts

In April 2021, Canadian meat processing businesses generated 5.4 billion Canadian dollars in gross domestic product, up from 4.6 billion in April 2020. (Source) This is a striking jump compared to many other industries in Canada.

With these incredible trends in the industry, here is a closer look at the meat industry in Canada to provide valuable insights to Canadian entrepreneurs who help our industry consistently grow year over year.

How much meat is produced in Canada?

This question often gets asked by many meat industry entrepreneurs when we forecast for a project, whether it’s hardware or software. It’s always great to know the market size of the industry in which you’re operating or planning to operate within. The numbers for the beef industry alone in Canada are impressive but not necessarily surprising considering Canada is one of the leading beef exporters in the world. Approximately 1.55 million tonnes of beef are produced in Canada each year. (Source).

What percentage of Canadian beef is exported?

According to cattle.ca data, Canada exports roughly 45 percent of its beef and cattle production each year, making it one of the world’s leading exporters of red meat and livestock. (Source).

Understanding the Canadian meat industry requires a holistic approach to make smart business forecasting. For that we also want to show you some insights regarding the poultry and pork industries in Canada:

How much chicken is produced in Canada?

Although we don’t have the latest 2021 data yet, 2020 numbers are still relevant in understanding the size of the poultry industry in Canada:

How much pork is produced in Canada?

Like the poultry industry, we still don’t have the data for 2021, but here’s what we know from 2020 according to Statista. (Source)

Which Canadian province produces the largest amount of pork?

Which country has the biggest meat industry?

The top five countries that followed China were the United States of America, Brazil, the Russian Federation, and Germany). In 2020, the world’s total meat production was around 335 million tonnes.

Which Country has the biggest poultry industry?

Which Country has the biggest pork industry?

How big is the meat industry in the world?

The meat industry’s market worth is predicted to increase from $838 billion to over one trillion dollars by 2025. In 2021, the United States generated over twice as much money from meat products and sausages. Germany, the world’s second-largest meat market reached over 28 billion dollars in revenue. Russia, France, and Brazil round out the top five countries in terms of processed meat revenue. (Source)

Where does the Canadian meat industry stand in the global competition?

With all these statistics about the meat industry, it begs the question, where does Canada stand amongst all its competitors? According to 2020 numbers, Canada ranks 11th out of 46 exporting countries. Canada’s total meat production accounts for 2.16% globally.

How can Carlisle help?

Are you looking to start a business in the meat industry in Canada, or maybe you’re looking to expand your operation? We are the experts when it comes to food traceability not only in Canada but also in the United States. Our decades-long experience and stable market presence make us the perfect partner that you can trust when it comes to food traceability. Contact us today and speak to one of our industry experts to understand how we can become a growth partner for your meat processing operation.

Blog: Take the Anxiety out of Recall Management Pt.2

Blog: Save Time and Money with Fully Integrated Solutions!